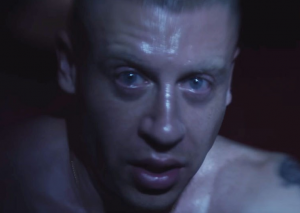 GRAMMY Award-winning artist Macklemore is once again making headlines, and this time it is for combining his anti-drug activism along with his music. The video (below) for his song ‘Drug Dealer’ is turning heads and bares the harsh realities of prescription painkiller addition. Unlike more stereotypical anti-drug messages, this one is not only an artistic masterpiece, but also targets the medical and pharmaceutical industries for fueling the drug problem in America.

Earlier this year he sat down with the President to talk about opioid abuse. He shared that not only did he have his own problems in the past, but that others close to him were affected as well. “I didn’t just know someone — I lost someone. My friend Kevin overdosed on painkillers when he was just 21 years old. Addiction is like any other disease — it doesn’t discriminate. It doesn’t care what color you are, whether you’re a guy or a girl, rich or poor, whether you live in the inner-city, a suburb, or rural America. This doesn’t just happen to other people’s kids or in some other neighborhood. It can happen to any of us,” he said.

More than 18,000 people died in 2014 from overdoses on prescription opioids. There are thousands more who started with painkillers and moved on to heroin. It is impossible to ignore the contribution of drug companies and the over-prescribing of their wares that have fueled this epidemic. More government agencies are taking notice as well, including the Centers for Disease Control and Prevention (CDC), which issued new recommendations for prescribing habits of painkillers.

Although these drugs are also easily obtained by addicts on the street, addressing the problem from the medical establishment level is a must. It’s good to see artists help shed more light on the situation to increase awareness and to hopefully motivate more people to get help.

If you know someone who is addicted to painkillers and aren’t sure what to do, contact us today to find out more about your options for intervention and treatment.

Heroin use on the rise, with a new face