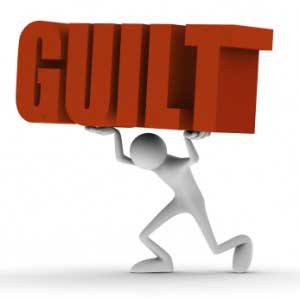 For parents, this is the strongest emotion that prevents an intervention.  The sinking feeling that maybe we didn’t do a good enough job when raising our child and if we had done a better job, then our loved one wouldn’t be having his problems with addictions.  As the addiction progresses and worsens, many mothers are haunted with this idea.  As a result of guilt manipulation, parents are unwilling to “punish” their loved ones for their behaviors.  Unable to kick them out of the house, parents often times also assume the negative consequences of the substance abusers addiction because it “isn’t really his fault”.

Could we have done anything differently?

Whether your child is a teenager or a grown adult with children of their own, being a parent of someone who has been abusing drugs or alcohol can be very emotionally devastating. When Intervention Services arrives at the family home to deliver an intervention, we usually ask the family to see a picture of the person we are going to be performing an intervention on.   Then the stories begin.  A family is sometimes embarrassed at first; afraid that we, as professionals, are putting THEIR family under a microscope.   For many parents of alcoholics and addicts, there exists a strong fear that almost prevented them from hiring professionals in the first place.  The fear that maybe if they had done things differently we wouldn’t be here.

We would like to address a few of the emotions that we see common to family members, especially parents, who are going through the intervention process.  Although sometimes the roles are flipped, more often than not, this is what we see:

Few can understand the bond that exists between a mother and her child.  Perhaps it is that extra nine months or that physical and spiritual connection that begins early on.  They are born perfect and we dream of their future.  Perhaps they will be smart and become an attorney, or maybe strong and we have the next Michael Jordan.  But deep inside, we just want them to be happy, healthy and safe.

“Maybe I didn’t hug him enough, or maybe I smothered him with love.  I just don’t know where it all went wrong.  I should have stayed with his father longer than I did, or maybe we should have divorced earlier.  I remember that there were signs earlier.  His grades were slipping.  I could have hired a tutor to help him.  People tell me that I should throw him out, but I could never do that.  He’s my baby boy and he always will be.  I’ll never throw him away.  He needs me.   No one seems to understand.  I’ll never give up on him.  One day he’ll turn it around.”

A mother of an alcoholic or an addict often assumes the responsibility of the addiction themselves.  The deep secret sometimes felt is “if I had been a better parent then my child wouldn’t be in this mess at all.”  That guilt becomes so powerful that a parent begins to not only assume the responsibility, but also the punishment.  A parent won’t throw their child out for something that they believe was never really the child’s fault at all…it was theirs.  So we pay their debts and tolerate the negative consequences ourselves.  We begin to absorb the pain of the addiction instead of allowing the addict to feel it.  It destroys us in the end.  This is what happens to a parent consumed by guilt over their child’s addiction.

Many times a mother will not allow a professional intervention to occur because of the fear that we are going to “order her to throw her child out” (which is untrue), or that we will discover that she was a bad parent and partially responsible for the problems (which is also untrue).  Part of our job is to help a mother to understand the addiction as it is, so that she, and her child, can begin to heal.

It is important that an interventionist understand the complex family dynamics that occur when an addiction springs up within a family.  It is important that we take an sympathetic approach to the difficulty faced when a mother decides to intervene on her child.

“There he is, that’s my boy.”  To see a father as he watches his son hit a baseball, ride a bike or swim for the first time it is easy to see the pride swelling in his heart.  We are teaching our children to face the world, and nothing is so satisfactory as seeing them overcome their obstacles, to become responsible…to slowly become men, or women.

“What the heck is wrong with that kid?  It seems like he just doesn’t care anymore.  He’s so behind on his bills.  Doesn’t even bother opening them anymore.  I’ve tried to explain to him that unemployment is going to run out and then where will he be?  Needs to start looking now instead of spending all his time out with his loser friends.  His mother keeps saying he’s using drugs, but what does she know?   My son would never do drugs.  Or if he is, I’m sure it’s just a phase.  Everyone goes through it.  He’ll grow out of this.”

Unlike a mother’s guilt, a father rarely assumes the guilt of “raising an addict or alcoholic.”  Rather, a father operates in two stages:

Many times a father will refuse to allow outside professionals to come in and fix a situation, because he desperately needs to fix it himself.  Or, he will simply refuse to accept that their child is “bad enough” to warrant an intervention.

It is important that we, as interventionists, help guide a father and provide him with the proper tools so that he can be empowered and be more effective in helping his child, without stepping on his toes as a parent.  Working with, rather than instead of, we can help a parent to face the truth of the addiction…which is often the most difficult thing for a father to do.

Where does guilt come from?

Of course, every parent has a degree of fear or guilt about how they raised their loved one, whether an addition is present or not.  Guilt comes from doubt and fear.  Fear that we missed something somehow, or indirectly or directly caused some of these problems.  However, what is important to understand is that a substance abuser understands intuitively that you have guilt and is quit skilled at hijacking your emotions and magnifying that seed of doubt…that guilt that already exists.  The most important thing is that the current feelings of guilt that you may have are being planted and reinforced over and over by the substance abuser.