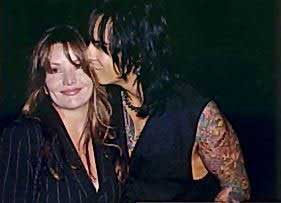 Nikki Sixx’s exwife, Brandi Brant has befallen on bad times. She was involved in smuggling cocaine, and she will receive up to 6 years in prison for the part that she played in it. Her involvement in the crime has led to an extreme hardship for her.

Since Nikki Sixx’s exwife, Brandi Brant associated with the wrong type of people, and she is now in a lot of trouble. Why did she take part in something so criminal? That is yet to be seen. She is the former wife of Nikki Sixx’s, the bass player for Motley Crew. Her career as a Playboy model was what she did for a living until she ended up jailed as a result of having to do with smuggling cocaine into Australia. She was also caught transferring drug money into bank accounts. The amount of the money that she transferred into the bank accounts with drug money was over the amount of $70,000.

Brandi Brant, Nikki Sixx’s exwife will be eligible for parole in 3 ½ years for her part in the crime of smuggling cocaine. During her court hearing, the court heard of all of her disturbed childhood that included an addiction to drugs and alcohol. At a young age, she had many problems that she attributes to the crimes that she committed later in life that put her in jail for 6 years. The sentence is for the entire 6 years, but once again, she will be eligible for parole after 3 ½ years. That does not mean that she will be released from jail at that time, just that she will be up for parole.

Many of the people that knew Brandi Brant were not shocked by the news. They were aware of her drug habit, but not that she took part in the transportation or sales of drugs. For that reason, the news was disturbing to those that knew her well.

Brandi hid the drugs in an airplane bathroom and was caught and arrested for her part in the crime. She will have plenty of time to contemplate over what she did wrong while she is in prison for the time that they have sentenced her to for her crime.

How Alcohol Contributes to Weight Gain