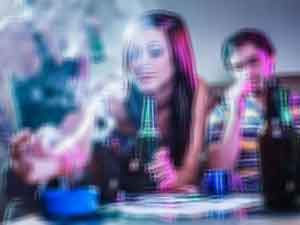 Unfortunately, your son or daughter can get involved with club drugs when you least expect it. Recognizing the signs that your child has started using club drugs can help you determine if it is time to seek professional help.

Depending on the drug that is used, the early signs of a problem may vary slightly. In the case of club drugs, like ecstasy, the signs of substance use and abuse may include:

Although some club drugs do not have obvious early signs, other substances like LSD or ketamine can cause hallucinations, odd behaviors or mood swings. The specific dangers associated with the drugs can vary slightly, but often relate to health concerns and addiction.

Signs of a Problem

It can be easy to overlook some of the early signs or assume that the problem is minor. Recognizing when the minor concerns become a serious problem can help you determine if it is time to seek professional assistance.

The signs that your teenager or young adult may be using club drugs or other substances that you may notice include:

Since many of the signs, such as mood swings or the development of depression, can be signs of other concerns, you will want to be sure that the changes are not limited to only one or two signs of substance abuse.

A single change can be a sign of other health concerns, such as a stomach flu in the case of nausea or loss of appetite or a mental health disorder that has developed over time.

It is easy for a young individual to assume that club drugs are safe because they do not have the reputation that is present with other substances. Even though it does not seem as dangerous, regular abuse of club drugs like LSD and ecstasy can result in the development of health concerns and addiction.

The problems that may develop include:

Substance abuse is dangerous, even if the substance is being used in a club or by several individuals. Recognizing the possible signs can help you determine if you should seek professional advice to find solutions that can help your son or daughter.

By seeking assistance, you can take action early and reduce the risk that an addiction will get out of control.

New York mother speaks out about her son’s addiction