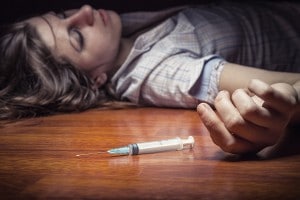 In 2015 there were over 30,000 deaths attributed to opioids. While this number is heartbreakingly high, it is likely not completely accurate. According to a team of researchers at Indiana University School of Public and Environmental Affairs, many overdose cases that have several drugs in their toxicology report don’t even get counted in the totals for heroin and other opioids, suggesting that the number could be significantly higher.

“What happens a lot of times when people overdose is that they have multiple substances in their system. Because of the use of poly-drug codes to classify deaths when multiple drugs are present, we tend to undercount the prevalence of heroin in deaths because we usually count whether the death was a result of heroin rather than whether heroin was present,” explained assistant professor in the School of Public and Environmental Affairs, Brad Ray.

This means that if someone passes away from a drug overdose of heroin, alcohol and cocaine, medical examiners might not attribute these deaths to any individual substance, but instead a new classification altogether. There are also other opioid-related fatalities that may include both heroin and a synthetic drug but not get counted as heroin.

But why does it matter how people’s overdose deaths are classified? For one thing, it allows law enforcement to track especially lethal batches of heroin. When this is done, it gives public services a chance to alert heroin addicts that the drugs they are buying are laced with more potent additives than they are used to. Another reason for accurate classifications is the fact that researchers are able to study if certain policies, laws or educational programs are effective by looking at all sorts of statistics, including heroin mortality rates.

So, in order to fix this problem, classifications regarding reasons for death may need to be altered and the method for reporting these classifications may also need to be changed. For instance, if someone has passed away with heroin and marijuana in their system, it may be safe to say that heroin caused the fatality, not marijuana, but coroners have to have the latitude to choose heroin overdose rather than a polydrug overdose.

Sometimes these sort of administrative functions have much more of an impact on policy than people realize, and since our nation is in the midst of an opioid epidemic, we must consider every angle to help save more lives.

One of the best tools to save people who are in imminent danger of overdosing is a well-planned and carried out intervention. Contact us today to learn more about professional interventions and how we can help your loved one today.

Elizabeth Vargas: “I Am an Alcoholic.”