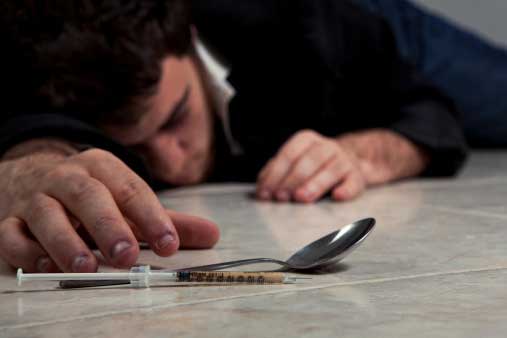 The standard definition of an opiate is “a medication or illegal drug that is either derived from the opium poppy, or that mimics the effect of an opiate (a synthetic opiate). Opiate drugs are narcotic sedatives that depress activity of the central nervous system, reduce pain, and induce sleep. Side effects may include over-sedation, nausea, and constipation. Long-term use of opiates can produce addiction, and overuse can cause overdose and potentially death.”. During later stages of opiate addiction the narcotic effects can actually stimulate the addict, giving him energy and the ability to “face the day”. Over time prolonged opiate abuse eventually becomes physically addictive and the body itself needs more and more of the drug or else develops severely uncomfortable symptoms. Standard withdrawal symptoms include sleeplessness, anxiety, restlessness, flu-like symptoms, nausea, muscle aches and pains and severe discomfort.

The most commonly abused opiates include Heroin, Methadone, Suboxone, Oxycontin (Oxycodone HCL), Vicodin (Hydrocodone), Morphine, Codeine, Fentanyl, and Opium. Abused for centuries, opium, laudenum and morphine addiction reached its height in the United States in the early 1900â€²s. As a response to the addiction problem, the Bayer Corporation created Heroin to help addicts withdraw off of Opiates. Later, during World War II, Methadone was created to combat morphine addiction. In the late 20th century, Suboxone was created to help addicts to withdraw off of Methadone and Heroin. It is important to understand that each of these substances are classed as Opiates and are addictive and mood altering. Many people make the mistake of substituting Methadone for vicodin and end up addicted to the Methadone.

The most common cycle of addiction involving Opiates is a user who begins using intermittently, then over time becomes physically addicted and begins using daily. Afterwards there is an 60% likelihood of becoming an IV drug user within 3 years. Generally, there are two classifications of people needing an Opiate intervention, both of which need to be handled differently from an intervention standpoint. It is important to understand that statistically less than 1% of opiate addicts quit using without the aid of some form of intervention or treatment. It is also important to understand that, statistically speaking, Opiate addicts are usually the easiest to conduct a successful intervention on since each day of their life is a trap they wish to escape from.

Opiate Intervention on a Recreational User

The first type of Opiate addict is someone who began using drugs recreationally, experimented with Opiates and eventually became physically addicted. Generally speaking, most experimental Opiate users become physically addicted within a year and them become daily users. After becoming physically addicted, the recreational opiate user becomes more and more obsessed with getting his drug. Trying to avoid the uncomfortable withdrawal and seeking another feeling of euphoria he becomes trapped in a never ending cycle. An opiate Intervention on a recreational user is usually easier than on a “pain management opiate user” because he has no legitimate reason for taking the drug. There is generally no “bad time” for conducting an opiate intervention on a recreational user and any day statistically has a high degree of success. The only exception to this is if the addict has a large sum of money coming in and will generally try to refuse treatment until afterwards.

The second type of Opiate addict is someone who, after developing some form of painful ailment (surgery, pulled muscles, joint aches, automobile accidents, etc) is prescribed an opiate to manage the pain. Since the body has a tendency to increase it’s tolerance to Opiates, over time he gets less of an effect from the same dosage. To counter, he increases his dosage, possibly even switching to a more potent opiate to handle the pain. Unfortunately, since the withdraw from opiates includes severe pain, his original pain increases exponentially and psychologically he believes his pain to be somatic (existing in the body). As a result, he continues using the opiates to “handle the pain” which may actually no longer have a basis in fact. He is now trapped, avoiding the painful withdrawal and searching for the euphoric feeling that another pill can give him. Performing an opiate intervention on a pain management user is more difficult than on a recreational user because he has a “legitimate reason” for using, and will be happy to show you a long list of doctors and prescriptions to validate this. In addition, a pain management opiate addict has a greater degree of denial systems and rarely admits to being addicted. He is simply “taking his medication”. An experienced intervention specialist is equipped to handle this and can usually manage any objections to treatment voiced by the addict.

Essentially each opiate intervention is unique and after proper analysis and guidance your intervention specialist will help you to determine when and what is the best approach.