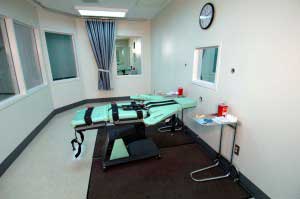 Texas faces yet another dilemma with execution drugs. Texas states they have 7 executions scheduled in the next 3 months, but they only have enough execution drugs for 2 more executions. Texas prison officials say they are considering switching to a different drug again, if they cannot find a supplier willing to make the drugs they use. A shortage of the barbiturate pentobarbital has made other states postpone their executions, but Texas is not a state that will likely do that.

Jason Clark, a spokesman for the Texas Department of Criminal Justice stated, “We’re exploring all options, including the continued use of pentobarbital or an alternate drug or drugs in the lethal injection process.” Clark continued, “It’s fair to say that any time there’s drug availability issues, we explore options.” Texas Legislature switched to lethal injection as the execution method, instead of using the electric chair in 1982. They used a three drug process, sodium thiopental for loss of consciousness in the criminal, then muscle relaxant pancuronium bromide is injected, and potassium chloride is then injected to stop the heart. European drug manufacturers stopped making sodium thiopental several years ago, because the death penalty is banned. The other drugs also became progressively hard to find.

March of 2011 Texas substituted sodium thiopental with pentobarbital. Then, in July of 2012 the execution drugs were switched to a single dose of pentobarbital. Clark stated that 39 executions have been carried out “without complication” using this method.

The Texas prison system states they have enough execution drugs to complete one more execution. Texas just used their second to last dose of lethal injection this week on Manuel Vasquez, who killed a woman in a Mexican Mafia related event in 1998 for not paying her “taxes” on the drugs she was selling. March 18, 2015 will be the last execution, unless Texas can find more of their supply or switch to a new drug. Randall Mays is set to receive that final dose in March. Mays was sentenced to death for shooting two police officers to death back in 2007.

This will be the third time Texas will switch drugs, if they cannot find a supplier. Several manufacturers have stopped making the execution drugs, because there is too much pressure from death-penalty opponents. Richard Dieter, executive director of the Death Penalty Information Center states, “We could be at a critical turning point, because it appears the supply of pentobarbital has run out and the use of midazolam has been halted until the Supreme Court decides on its use.” Dieter continues, “With literally no other alternatives available at this point, other states are considering going back to old methods.” He explains, “Oklahoma is looking at nitrous gas and Utah is looking at the firing squad.”

Texas is the leader when it comes to executions and many states will follow, as they are postponing their executions for now. Dieter explains, “We’ll be watching Texas because, as Texas goes, so goes the nation, because they’re the leader on executions.”