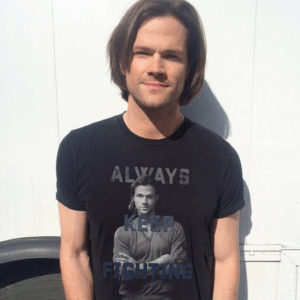 The “Supernatural” star Jared Padalecki has come forward with a new t-shirt campaign called “Always Keep Fighting”. The profits from this campaign are going to an organization called: To Write Love on Her Arms. To Write Love on Her Arms supports people struggling with depression, addiction, self injury, and suicide. This organization began in 2006, the founder Jamie Tworkowski wrote a story about a friend and a very serious situation. This friend was struggling with self injury and addiction and Jamie wanted to discuss this problem that many people hide.

Jared Padalecki had a goal of seling 1,000 t-shirts for his campaign, “Always Keep Fighting”. This goal has been surpassed by more than Jared Padalecki hoped. Over 33,000 shirts have been sold. Anyone you knows Jared and the show, “Supernatural” would have expected these types of sales. Jared and the show have a huge fan base. Jared has been promoting this campaign through social media, offering phone calls and other gifts in a raffle, to the people buying his shirts.

Jared Padalecki explained the reason behind his choice to support this foundation, “I, for a long time, have been passionate about people dealing with mental illness and struggling with depression, or addiction, or having suicidal thoughts and, strangely enough, it’s almost like the life I live, as well.” Jared admits, “And I, in the past, have had my own struggles of not being so happy with where I am in life, which is strange and I think it goes to show.” Jared emotionally divulges, “Maybe a lot of people don’t know this, but Season 3, we were shooting an episode, and I went back to my trailer to get changed and just kind of broke down.” The successful actor continues, “A doctor came to set and talked to me for about 30 minutes or 45 minutes and said: “Jared, I think you’re clinically depressed.” And it kind of hit me like a sack of bricks.” Jared tries to make sense of the situation stating, “ I mean, I was 25 years old. I had my own TV show. I had dogs that I loved and tons of friends and I was getting adoration from fans and I was happy with my work, but I couldn’t figure out what it was; it doesn’t always make sense is my point.” Jared explains, “It’s not just people who can’t find a job, or can’t fit into society that struggle with depression sometimes.” Jared explains he also lost a friend of his that was struggling with depression on New Year’s Day, by committing suicide.

Jared is trying to raise awareness and break the stigma with these types of illnesses, “People who are dealing with depression, addiction, or suicidal thoughts or mental illness … they’re strong.” Jared Padalecki optimistically continues, “You’re strong because you’ve been in this fight and you wake up thinking you’re going to beat it again today.” Jared’s shirts for “Always Keep Fighting” are available until March 18. The shirts will ship once the campaign ends. Check out Jared’s social media accounts for other information and raffles he is doing.