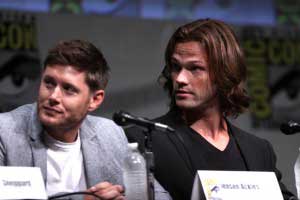 Mental illness has no bounds. It knows no age, race, income, sex, or education level. Research has shown that one in five Americans has a diagnosable mental illness. What’s wrong with this? Many people are too ashamed to ask for help. That is all changing, celebrities ending mental illness stigma are popping up everywhere and are encouraging people to seek help. Mental illness has a negative stigma and most do not want to be associated with it, but these celebrities are stepping forward.

Jared Padalecki Deals With Depression
Jared, who stars on the hit show, “Supernatural” admits that he struggled with depression. Jared has taken a huge step in celebrities ending mental illness stigma and addiction. He and his co-star Jensen have raised millions of dollars to support foundations that help people with mental illnesses. He is also very active in social media and asks people to share their stories and come together and this has a lot of people coming forward.

Demi Lovato Deals With Bipolar Disorder
Demi Lovato has been very open about her mental illness and recovery. She stated, “I never found out until I went into treatment that I was bipolar.” She also made a few shows on “MTV” about dealing with her struggles and everyday life.

Pete Wentz Deals With Bipolar Disorder
Pete Wentz, band member Fall Out Boy, opened up about his struggle with bipolar disorder. Pete Wentz, “Everybody figures themselves out in a different way.” He continues, “And I think there’s no shame in talking about that kind of stuff. It’s not something you should feel scared … talking about.”

David Beckham Deals With OCD
David Beckham has come forward with his mental illness, obsessive compulsive disorder. He explained one of his experiences, “Walk into a hotel room and before I can get settled I have to unpack, everything has to be perfect; the magazines the right way, the drawers in the right way, or whatever it is. It’s tiring. But it’s more tiring if it’s not done the right way.”

Brittany Snow Deals With Depression
Brittany Snow, most famous for her “Pitch Perfect” movies, stated her suffered from a long battle with an eating disorders. After coming out of her eating disorder, she began cutting herself and struggled with depression. She went into treatment when she was 19 years old and was able to get the help she needed.

Olivia Munn Deals With Anxiety and Trichotillomania
“The Newsroom” actress, Olivia Munn, suffers from trichotillomania. When she feels anxious, she plucks out her own eyelashes. She also stated that she has experienced social anxiety, and would not enter a party unless she was accompanied by someone else.

Jim Carrey Deals With Depression
There is a stigma associated with comedians, which is that most of them suffer from depression in silence. Jim Carrey has come forward and stated that he has struggled with depression. Carrey told “60 Minutes”, “I was on Prozac for a long time. It may have helped me out of a jam for a little bit.” He continued, “I had to get off at a certain point because I realized that, you know, everything’s just okay.”

Jon Hamm Deals With Depression and Alcoholism
Jon Hamm has become public about his struggle with depression and alcoholism. Hamm, who played Don Draper in “Mad Men” states, “I did do therapy and antidepressants for a brief period, which helped me.” He promoted getting the help you need, which is one good thing about celebrities ending mental illness stigma and also addiction.

Leonardo DiCaprio Deals With OCD
Leonardo struggled with the OCD as a child, and told Katie Couric in a 2004 interview, “I had the thing where I would walk to school and have to walk, you know, go back a block because I didn’t step on a crack. And I felt like something was going to go wrong if I didn’t do that.” He stated that during the filming of the “The Aviator” his OCD came back. He wanted to use his OCD for his role, but it took a few months to step back out of it and states, “There’s trails of it here and there.”

Help with Depression and Anxiety

How a Mental Disorder is Diagnosed