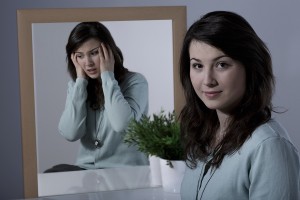 Adults with a troubled childhood may be at higher risk of developing bipolar disorder, according to researchers. The co-author of a study published in a recent issue of the British Journal of Psychiatry, Filippo Varese of the University of Manchester in England, said, “(T)he link between experiencing a troubled childhood and subsequently being diagnosed with this serious condition is extremely strong.”

People who live with bipolar disorder experience unusual shifts in mood, as well as energy and activity levels that effects their ability to complete daily activities. During a manic phase, they may have increased energy levels, have difficulty sleeping or feel as though their thoughts are moving at a rapid rate. During this time, they can be agitated or irritable, and engage in risky activities, such as spending more money than usual, abusing alcohol and drugs or having reckless sex.

During a depressive phase of the illness, a person may feel down or sad and report having very little energy. They may have sleep difficulties, such as sleeping too much or find it difficult to get to sleep. The world may feel like an empty place that doesn’t provide much pleasure, and thoughts about death and suicide are not uncommon. Substance abuse is also at risk in this phase.

Link with Emotional Abuse a Strong One

Varese and his research colleagues looked at statistics gathered from 19 studies which were published between 1980 and 2014. They defined adversity as those children who experienced abuse, neglect, bullying or the loss of a parent before their 19th birthday.

The researchers discovered that adults living with bipolar disorder were almost three times more likely to have been victims of physical, emotional or sexual abuse during childhood as the general population of adults. The link between emotional abuse and developing the mental illness was particularly strong.

The results of the study didn’t establish a direct cause-and-effect relationship, but these results can help those in the treatment community who work with those living with bipolar disorder, including addiction specialists.

Bipolar Disorder and Risk of Addiction

As indicated earlier, people living with bipolar disorder are at a higher risk for developing a substance abuse issue during their lifetime, with alcohol being the most commonly-abused substance. Professionals working with clients with a dual diagnosis (mental illness and addiction) should be particularly sensitive to the possibility of childhood trauma, which should be addressed during counseling sessions in order to deal with the root of the addiction.

Family members and friends of people in this situation should also be aware of the dangers of addiction and seek rehabilitation programs that can adequately treat co-occurring disorders.

Relationship Between Addiction and Suicide