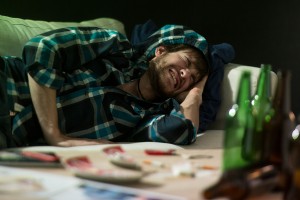 Drinking on college campuses is more than just a rite of passage or something that young people do to “blow off steam” in the wake of a challenging academic schedule. According to statistics compiled by the National Institute on Alcohol Abuse and Alcoholism (NIAAA), about 20 percent of college students meet the standard for an Alcohol Use Disorder.

What is Alcohol Use Disorder?

Alcohol Use Disorder is defined in the Diagnostic and Statistical Manual of Mental Disorders (DSM). The latest version, DSM-5, uses questions to evaluate whether a person has symptoms of Alcohol Use Disorder (AUD). Answering “Yes” to two or more questions on the list indicates that a person has AUD. The seriousness of the condition is evaluated based on the number of “Yes” answers.

Examples of the types of questions include:

In the past year, have you ever,

Alcohol acts on the central nervous system to depress its function. It reduces brain activity, which is why in small amounts it helps people feel relaxed. Students who are trying to juggle their courses with assignments and exams, are under a certain level of stress. Alcohol is readily available, relatively inexpensive and legal as long as the students are of age.

Obviously this presents a serious problem given the tendency of students to over-indulge and put themselves into even more dangerous situations.

When alcohol use moves from having a drink or two as a pleasant way to relax to a major coping strategy that involves drinking to excess, it can lead to academic problems for students. Some of these issues include:

If this pattern of alcohol use to cope with stress carries over after graduation, it sets an unhealthy precedent for dealing with work and family stress. Someone who meets the standard for a moderate or severe case of AUD is not likely to improve without professional treatment. A young person who is already meeting the standard in college who doesn’t make some changes in their use of alcohol may find themselves slipping into a more serious problem that requires professional help.

What Can Be Done About It

First of all, colleges need to do a better job discouraging alcohol-related events on campus and implement more effective policies that promote responsible behavior among students. In addition to the poor academic performance, they are even more at risk for tragedies such as automobile accidents, alcohol poisoning, sexual assault and other violent acts.

For students and young adults who are not able to curb their behavior and are continuing to harm themselves as well as endanger others around them, intervention and treatment are the most effective ways to help solve the problem.

If you have a loved one struggling with an alcohol use disorder, contact us today to find out more about successful strategies to help them recover.