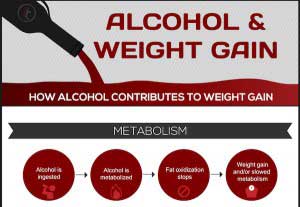 How Alcohol Contributes to Weight Gain: A Sobering Statistic

Many studies have been completed on how alcohol contributes to weight gain. Yes, we all know about the endless amount of calories in those fruity mixed drinks, as well as the infamous beer belly stereotype, but do you really know what you are drinking in terms of calories? Well, personal trainer, Lucas James, posted an info graphic on his blog detailing the relationship between alcohol and gaining weight. The results were shocking, to say the least.

The info graphic starts out by explaining what happens to your body when alcohol is ingested. When alcohol enters the body your metabolism slows down. The human body cannot store alcohol, so the ingested alcohol is metabolized immediately. Since metabolizing the alcohol in your body is now the main priority, your body stops breaking down the other stored fats and sugars in your system. In turn, this allows the fats and sugars in your body to build up, ultimately contributing to your weight gain.

The next section in his info graphic is the breakdown of calories. James explains that alcohol contains 7 calories per gram, which is almost the same as ingesting pure fat. Alcohol does not sound that appetizing when stated like that. When looking at this fact, the only thing I could picture was drinking a greasy cup of lard, which instantly turned my stomach. James went on to explain that calories in alcohol are considered empty calories. Empty calories mean these calories serve no nutritional value to the body. Therefore, there is no benefit to drinking alcohol, as far as your body’s needs to process throughout the day, when it comes to calories. James explains that protein has 4 calories per gram and carbohydrates also have 4 calories per gram. These calories can be taken and processed by your body in order for you to sustain your energy and health throughout the day. Another shocking fact is that fat contains 9 calories per gram, which is only 2 calories above alcohol.

Yes, this sounds shocking, but James really wanted to make sure we knew what he was talking about. He then went on to compare drinking certain drinks to eating certain types of food. He explains that drinking one rum and coke is equivalent to eating a blueberry muffin, as well as drinking a pina colada is similar to eating a doughnut. A glass of wine, which is often in the debate of whether or not it is healthy, is similar to eating a piece of cake. A pint of lager is similar to eating a slice of pizza and one frozen margarita contains the same amount of calories as a cheeseburger. Probably the best comparison is when James singled out the wine drinkers. James claims that wine drinkers consume 2,000 extra calories a month on average. This amount of calories equates to eating 141 ice cream cones in a year. James also explains that we tend to eat unhealthier food when drinking, which also explains how alcohol contributes to weight gain. Think about these statistics before reaching for your next drink.