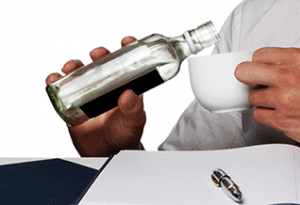 The Downfall of a High Functioning Alcoholic

Alone in a cemetery stands Alli, crying and in shock. Now Alli was not really alone. Her friends and family were all there to support her, but she felt alone. Honestly, no one could have been there and she would not have even noticed. Alli had a bright future. She just started her second year of out of state college. Everything was going great. Until she was called home shortly after leaving for college to return home for something terrible.

She knew exactly what was happening, but no one else did. She was returning home to say goodbye to her mom one last time. You see, Alli’s mother, Mary, was a high functioning alcoholic and no one knew about this except Alli. Alli visited her mother in the hospital for a week before Mary passed away. Mary died of cirrhosis of the liver, at the age of 42.

This news came as a shock to everyone, except Alli. Now, Alli was still shocked, but had known it would eventually happen. Alli was the only one that knew Mary’s deep, dark secret, which was that Mary was an extreme alcoholic. Mary was considered to be a high functioning alcoholic. This means Mary was able to function properly in society, without anyone knowing how bad her drinking habit was. She went to work, managed her money properly, and functioned like any normal person would. When Mary got home from work or any event, she would head straight for the hard liquor. She would drink for hours by herself. Mary was divorced, so it was just her and Alli in the house. That is why Alli was the only one who knew how bad it was.

As what most family members do, Alli would cover up for her mother and make excuses for her. Alli was ashamed and embarrassed by what her mother was turning into. Eventually, things were getting way out of hand. When someone consumes that much hard liquor, it not only affects the body, it affects the mind. Alli, at one point, claimed Mary pulled a knife on her. Can you imagine your own mother doing this to you and not having anyone to turn to? When Alli was leaving for college, Mary would not let her take any of her clothes or her car that her father bought her. Her father put the car under Mary’s name to save on insurance. Mary claimed that if Alli tried to take that car to college, she would call the police and report it as stolen. Alli just left. She figured it was easier to buy new clothes and take public transportation, than fight with her mother. Mary claimed that she threw out all of Alli’s clothes. Was this because Mary did not want Alli to leave her? We could not make sense of her logic towards the end of Mary’s life, which was very sad.

At one point, before Alli left for college, she reached out for help. She could no longer take it and confided in a family friend. Alli told her all about Mary. This friend immediately came to help. They looked up treatment centers and other ways to help, but Mary refused. Mary actually got very violent and upset with Alli for reaching out to someone. Alli kept telling her mother, “We want to help you. We want you to be happy.” Mary lashed out at her, saying, “There is no “we”, so just stop this crap right now!” This little homemade intervention made Mary uncomfortable and used the oldest trick in the book to make the intervention stop. She used her unhealthy coping skills to stop the intervention. She lashed out and made everyone scared to bring up the subject again and they stop. Mary won, or so she thought.

Mary actually lost. She lost her life. In a heartbreaking Facebook message, Alli wrote, “My mother will never be there to see me graduate, see me get married, see her grandchildren, or be a part of anything else in my life.”