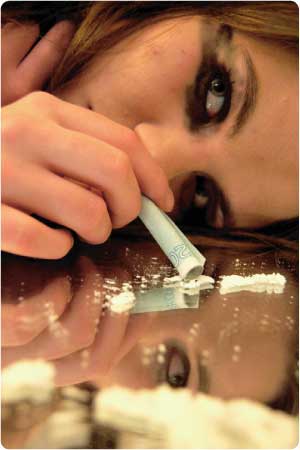 Cocaine is essentially a stimulant.  The psychoactive chemical is obtained from the coca bush called “Erythroxylon Coca.” It acts by preventing the re-uptake of the neurotransmitter Dopamine. It also causes an increased release of Epinephrine and affects receptor sensitivity. Cocaine is sometimes cut with amphetamine or local anesthetics such as benzocaine or lidocaine. It is sometimes mixed with heroin to intensify the “rush” or give it a “kick;” this is called “speedballing.”

Crack is a mixture of cocaine and baking soda that is made into a paste and dried. The hard mixture is then broken up into “rocks” which are smoked. Heat causes the mixture to produce a “freebase” form of cocaine that vaporizes and is rapidly absorbed from the lungs into the blood stream. After absorption into the blood stream, smoked cocaine goes almost directly to the brain where it produces a very rapid and intense effect that is short lived. There have been reports of crack and methedrine mixtures being smoked to intensify effects.

Short in duration, varying in intensity according to the route of administration. Users report a “rush” effect often centered in the stomach or sex organs and experienced as sexual satisfaction. Said to induce a feeling of “clarity” of mind and a feeling of greater muscular strength while under the influence. Cocaine becomes an acquired primary drive that eventually becomes more important than food, shelter, and sex.

Seizures or sudden cardiac arrest can occur at any time during use and may be related to “kindling” phenomena in brain and cardiac tissues. These reactions have occurred the second or third time a person “snorts” cocaine, which refutes the claim that seizures and cardiac arrest only happen after chronic high dose use especially by smoking or IV routes.

In addition to the previous information, we have provided the following pages to be of help to you about cocaine abuse: