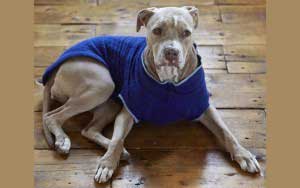 The Alarming Story of Dogs Traded For Drugs

Dogs traded for drugs seems like a headline in a fictitious movie, but it is not. Most people would never even think that something like this could have, but it has happen more than once. Brodie, a 6 year old Boston Terrier and French Bulldog mix, went missing at the end of last year and they are still looking for him. A women claiming to be the owner picked him up at the front desk of an apartment building and sold Brodie to her drug dealer. Since then she has been arrested for multiple offenses and refuses to say who she sold Brodie to.

Now Morgan Bogle and Scott MacDonough are going through a similar situation. Their dog, Sugar, was traded by their dog walker for drugs. Since Sugar is a pitbull they rescued, they fear she has been sold into a dog fighting ring because of her bred. They have been frantically looking for her. There has been a huge push on Instagram to find her. Sugar’s dog walker claims he lost her last Monday, in New York. It is suspected that Sugar’s walker was using drugs. They believe he sold her for money to buy drugs. Some people might ask why would anyone do that. When someone is addicted to drugs they will do anything to get their next fix. They do not care about the consequences. Bogle stated the location of her former dog walker, “He’s currently in the psychiatric ward.”

The New York Post released eye witness statements saying, “the man flipped out while Bogle was away, kicking the front door of her apartment Monday while shouting and swearing.” Bogle stated that the dog walker has allegedly hired a lawyer and will not give out any information on where Sugar might be located. Bogle and MacDonough have done everything they can to find Sugar. They hired a pet detective, created an online campaign through social media, and hung fliers around the city. Bogle stated that the dog walker was not arrested and police are not helping in this case.

In an attempt to find Sugar as soon as possible, Bogle and MacDonough are offering a $10,000 reward, no questions asked. $5,000 of the reward was raised through friends and family. A very kind and considerate person, David Lee, a Golden State Warriors basketball player, decided to match that amount, donating another $5,000. Dogs traded for drugs is not just a one time event, it is happening more than you think and more than it is being reported. Please be cautious when looking for pet sitters and walkers.

If you’re in New York, Sugar also goes by Sugy. She was last seen on February 23, 2015. Sugar might still be wearing a blue sweater. She is friendly and will come when called. She was once rescued from an abusive situation and may be back in that same situation. Please call or text 917-796-0171 or email findsugarnyc@gmail.com if you have any information.

The search for Brodie is still on as well. If you have any information on this case or would like to help click here.

Alcohol not Beneficial for Sleep Problems