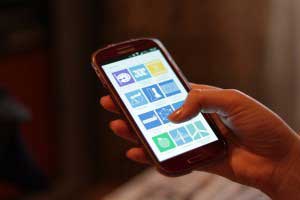 A Smartphone Addiction Can Be Hard To Identify

For many people technology has become a mandatory source to live. They use their cellphones, tablets, computers, navigation systems, and other forms of technology without even thinking about what if this technology was ever invented. What is the first thing you do before you go to sleep and when you wake up in the morning? For most people, the answer is check their phones. Being creatures of habit, most people think nothing of this motion they complete everyday, but asking yourself if you have a smartphone addiction can help you gain perspective on the situation.

Recent studies show have shown that a majority of Americans sleep with their cellphones next to their beds, not to mention, all of the texting or talking while driving accidents that have happen. A Harris Interactive poll shows that a third of the population with cellphones check their phones during movies. People have become so attached to their smartphones, that they cannot see that they are addicted. Countless social media updates and selfies, seem like the new way of life, but it is not. There have been a variety of studies done, that show the effects of this type of behavior in a negative way.

Here are the 6 signs of an addiction applied to a smartphone addiction.

Does your cellphone stand out amongst other things you do on a day to day basis? For example, can you not function properly at work, if you left your cellphone at home?

Getting an update or text message can give you a sense of happiness or a brief escape from what it going on around you. For example, have you ever been bored and decided to text a friend or update your status complaining that you are bored, instead of interacting with the people around you?

Do you find yourself spending more and more time on social media and in general on your phone? Are you not getting other activities done, because you are spending too much time on your phone?

Are you agitated or irritable when you cannot use your cellphone? Do you go into a complete panic attack if you have misplaced your phone? These negative feelings are withdrawal symptoms from not using your phone.

Do others comment on how much you use your phone and do you become defensive when they confront you? Becoming defensive and finding excuses for your actions are a sign of conflict and this impacts you and your relationships with others.

Have you identified that you are spending too much time on your phone, but cannot stop even when you physically place your phone out of sight? This is a relapse and needs to be treated.