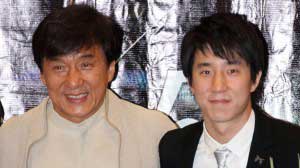 Jackie Chan’s son, Jaycee Chan is reported to have been arrested by police in Beijing for consuming marijuana. He tested positive for marijuana during his detainment. Taiwanese movie star, Ko Chen-Tung was arrested along with Jaycee. Allegedly, Ko received a sentence of only 14 days in detention and then was released after confessing to having consumed marijuana. Whereas, Jaycee could receive a maximum sentence of three years if convicted and could also be convicted for hosting others to consume drugs.

During their arrests, authorities found 100 grams of weed inside of Jaycee’s residence. Jackie Chan was named anti-drug ambassador by China in 2009, he is clearly humiliated by his son’s actions and has stated that he vows to help him through his recovery.

According to ChengDu Living, it was once almost impossible to get access to marijuana in China due to the only thing closest being available being the Taklamaklan Tan. This was served only by lamb skewer proprietors and mostly resulted only in headaches and a dull high that it didn’t get much business. Marijuana in its original form was first introduced into China by travelers with a small group of hippies coming from the Southern Silk Road with bags of the stuff in their hands. Initially, the smoking circles were fairly tight and confined until the hippies started to turn their friends onto it and the issue started to become epidemic. In China, the dealing isn’t always done person-to-person, some dealers have their own Internet platforms for it as well.

In China in general, drug use is considered a rebellion against the government. The high of marijuana in particular has been known to trigger anti-government discussions, which is considered a disenfranchisement of the government. In China, marijuana is considered to be on the same level as heroin. In 2013, there was no apparent government crackdown on marijuana in particular. In June 2014, however, Chinese president Xi Jinping initiated a crackdown due to many celebrities being detained on drug charges. Efforts for the crackdown will probably get even more severe thanks to the incident of the Chinese cops arrest Jackie Chan’s son over drugs.