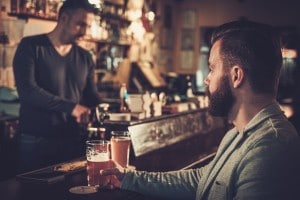 In addition to underscoring the potential for addiction after divorce, the study also brings up an interesting point. For many people, surrounding themselves with loved ones that are interested in their wellbeing is so vital, that when it is gone, alcohol abuse can escalate and even take over.

This particular study, which appears in The American Journal of Psychiatry, was conducted using more than 900,000 married people in Sweden. These people were all born between 1960 and 1990 and did not have any history of personal alcohol addiction prior to the study.

“Married partners tend to look out for each other and reduce dangerous behaviors like smoking and drinking. It is not the stress of the divorce that is predominantly causing the increased risk of developing alcohol use disorder. It is the loss of the protective elements of marriage,” reported Dr. Kenneth S. Kendler.

In most cases these protective elements are usually subtle and the partner may not even be aware they are happening. For instance, maybe alcohol is not consumed during the weekday because one partner is tired, or too busy. Or possibly alcohol is kept to a minimum one night because one partner is not comfortable with all the people at the party and the couple decides to leave early. Whatever the reason, these subtle messages can keep one or both partners from overindulging.

While there are certainly people who do go through depressive episodes fueled by alcohol following a divorce, the study shows that the bond itself, or lack thereof, was more of a determining factor.