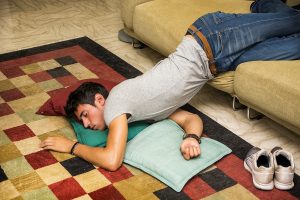 Curbing underage drinking has been a massive and lengthy project for high schools, government agencies and parents throughout the country for decades. It seems like all that effort is starting to pay off, as reports indicate that teens drink less than they used to overall.

However, binge drinking (consuming several drinks in one sitting) is still prevalent among this age group and is considered a major problem. While the number of teenagers engaging in this type of behavior has gone down, it is still very much an issue that needs to constantly be addressed.

Binge drinking is especially dangerous because it oftentimes leads to troubling situations and risky behavior. Due to the rapid and excessive amount of alcohol in the system, teenagers can find themselves making unhealthy decisions regarding driving, sex, violence and other drug use. Binge drinking lowers inhibitions and cognitive ability that may otherwise help prevent them from engaging in those types of activities.

Experts agree that binge drinking should be addressed by educators, healthcare providers and parents. In fact, it seems that parents are the most likely to make an impact on whether or not their child engages in these types of drinking habits. It takes a bit more effort and vigilance than simply telling them not to, but continued prevention efforts can pay off, especially through leading by example.

“Of course, kids will always do what they’re watching as opposed to what you’re telling them. If you’re telling them not to drink, but you regularly tie one on, that won’t work, period,” said Dr. Gail Saltz, a professor of clinical psychiatry at New York Presbyterian Hospital Weill-Cornell Medical College.

Parents are generally placed at a disadvantage because they are competing against their child’s peers. Many teenagers tend to do things they normally wouldn’t do if their friends are engaging in that type of activity. So, experts advise parents to learn who their child is associating with, what type of activities they are involved in, and to familiarize themselves with new friends and groups.

In addition to education and prevention efforts, there are often many opportunities for various forms of intervention as well. For example, stepping in when parents see changes in behavior or a shift in performance at school and extra-curricular activities. Or it may be if they smell alcohol in them, are coming home in the middle of the night or they get in trouble for underage drinking.

If caught and effectively addressed through appropriate actions, parents can often avoid more serious alcohol abuse problems that may involve intervention from law enforcement, or worse. If you have a loved one with a problem that you believe needs an alcohol intervention, contact us today to find out how we can help.