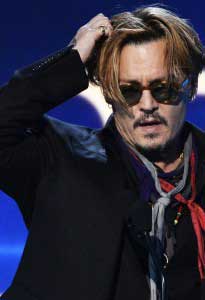 Rumor has it that after a recent relapse, Johnny Depp is going to give rehab another try. Although the Johnny Depp rehab rumors were published in the National Enquirer, the actor did seem to be intoxicated at the Hollywood Film Awards in November, and he is apparently “being pressured to seek sobriety.” During his speech at the Hollywood Film Awards, Depp appeared to be drunk and is said to have delivered “an embarrassing boozy speech.”

Depp’s family and his fiancee, Amber Heard, have reportedly told the actor that he needs to get help to sober up. Although Amber has been supporting Depp and standing by his side as he attempts to recover, a National Enquirer via Radar Online source added, “She is dead serious about walking away from him unless he cleans up his act.”

According to the National Enquirer, Depp is currently trying to kick the habit with “an at-home rehab program.” He is said to be “relying on professionals to help him get through this fight in private.” According to the Enquirer, the at-home rehab program will allow Depp to get all the help he needs without having to enter a treatment center where he might compromise his privacy.

Depp’s ex-girlfriend Vanessa Pardis, mother of his two children, is said to be blaming Amber Heard for Depp’s relapse, while other sources are claiming that “Amber broke his sobriety, but she isn’t necessarily a bad influence.”

The 52 year old actor has not appeared in public to promote his new musical “Into The Woods.” The film debuted in theaters on December 25th, and although Depp’s costar Anna Kendrick, who plays Cinderella, has been making the rounds to talk up the film, Depp has remained quiet. Depp did not attend the New York City premiere of the film, and his absence “raised a lot of questions.” Disney Studios, producer of the film, has reportedly excused Depp from all press and promotional events related to the film.

The renowned actor has a history of alcohol abuse. During a 2013 interview with Rolling Stone, he admitted to having struggled with alcohol in the past, but claimed to be 18 months sober at the time of the interview. He added that he did not think he was an alcoholic because he did not have “a physical need” for alcohol. Rather, he says, he used alcohol as a “self-medication over the years just to calm the circus. Once the circus kicks in, the festivities in the brain, it can be ruthless.”

In the Rolling Stone interview, Depp admitted that perhaps he and alcohol “got along too well.” He added that after drinking for years, he could see no reason to start drinking again. He said, “I just decided that I pretty much got everything I could get out of it.” However, if the Johnny Depp rehab rumors are to be believed, the actor apparently decided that he might be able to get a little something more out of it after all.

How Physical Fitness is Beneficial in Recovery