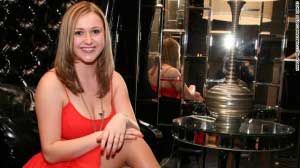 Skye McCole Bartusiak was a talented actress, staring in her first film The Patriot, alongside Mel Gibson, in 2000. At the age of 8 years old she was in a major movie, staring as Mel Gibson’s daughter. Not many actors and actresses can say that. At the time of her death, she was just 21 years old and had an impressive amount of work under her belt. She played major roles alongside Michael Douglas and Brittany Murphy as well. She was preparing to direct her first feature film before she her death. Skye McCole Bartusiak was found dead in her apartment, behind her parent’s house, in Houston Texas, on July, 19, 2014. Her boyfriend found her sitting up in her bed. He then, called her mother to the apartment. Helen, her mother, began CPR with no luck. Paramedics arrived and work on Skye for 45 minutes, but she was unresponsive. Her cause of death was unknown at the time. Her toxicology report was just released and it was ruled an accidental overdose. Skye had combined a deadly concoction of hydrocodone, difluoroethane, and carisoprodol.

Hydrocodone is found in pain killers like Vicodin. Difluroethane is an inhalant commonly found in household cleaning products that can be huffed to get high, like Lysol. Other huffing products are any aerosol sprays, cleaning fluids, glue, paint, paint thinner, nail polish remover, and lighter fuel. Carisoprodol is a muscle relaxer. We do not know how long she had been doing this mixture of drugs. This could have been her first time or maybe she has been doing it for years. Abusing prescription drugs and household items is just as dangerous as using street drugs. People think that using household items and medicine won’t hurt you as much, but they are wrong. Mixing drugs is very dangerous. Helen claimed Skye had been suffering from seizures the past week. It is a proven fact that huffing can cause seizures and even death. Huffing, like many other drugs, kills brain cells. That is not a good thing. So why do it?

Helen McCole Bartusiak, Skye’s mother, said Skye “had been healthy and did not drink or do drugs”. This shows exactly how abusing drugs works. Skye was either hiding this from her mother or her mother was denying the fact that her daughter was using drugs. Records did state that Skye suffered from seizures when she was little. That is why everyone thought she died from a bad episode of a seizure. That was not the case. If you are prone to having seizures, huffing will not help the situation. It will only cause more damage, at a faster rate. Either way, if Skye had just started experimenting with drug or if she had been using for awhile, we can’t help but wonder why? What kind of state was she in? Was she stressed out? Was she depressed? We will never truly know. All we know is that we have now lost another person to drugs.