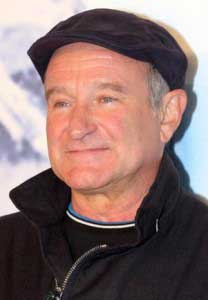 We live in a society were if there is a problem, there is a pill for it. Have you ever stopped and looked at the back of the bottle, for the side effects of these wonderful pills? Medication labels are held to a certain standard to list even the minute side effects, but nevertheless, these are still side effects that have occurred while taking the medication. No matter how rare the side effect is, it needs to be placed on the label.

The autopsy results, not only show Williams was under the influence of antidepressant drugs, but a powerful antipsychotic Seroquel was also found at the scene. Seroquel is used to treat schizophrenia and bipolar disorder. Among the list of side effects listed is suicidal thoughts. Does taking 2 separate medications with suicidal thoughts increase the likelihood of commiting suicide? Another red flag raised is the fact that Williams was prescribed this medication on August 4th, seven days prior to his death.

Investigators found that 8 pills were missing from the bottle. The medication’s direction label specifically states to take one pill a day. Did Williams taking one extra pill send him over the edge or was it a combination of the drugs, plus the overdose of the Seroquel? We will never know. Other side effects of Seroquel include, psychosis, paranoid reactions, delusions, and depersonalization. The side effects of medications need to be taken seriously. In the United States, 23,755 suicides are attributed to psychiatric drugs each year. With a number that large, why is this situation not being taken more seriously? Maybe the death of this loved actor will spark a concern in people that are thinking about taking or giving these types of medication.