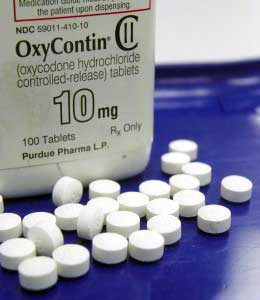 Purdue Pharma, which makes the best-selling painkiller OxyContin, is being sued by the state on Kentucky. What are they being sued for? Kentucky claims Purdue Pharma knowingly sold OxyContin to doctors and hospitals in their community within disclosing how addictive the drug was.

OxyContin is a powerful opioid that works as a painkiller. This drug offers 12 hours of relief, which means the patients do not have to take as many pills for their pain. OxyContin was placed on the market in 1995. With all the hype around this new painkiller, addicts discovered they could crush the pills, then they could snort or inject the drug for an intense and immediate high. This method quickly caught on and was spread across the country.

Purdue Pharma has never gone to trial before now, on a case of OxyContin abuse. This company has won over 400 personal injury lawsuits related to their best selling drug. They have settled some product-liability cases related to OxyContin behind closed doors, but nothing like what Kentucky is bringing to the courtroom Purdue Pharma’s attorney’s have defeated more than 10 attempts of class-action lawsuits against this addictive drug.

Purdue Pharma is accused in a civil suit filed by the state of Kentucky for actions that lead to creating addiction problems on a catastrophic scale. Kentucky claims that many of the abusers went on crime sprees to feed their OxyContin habits. These addicts ended up in jail, in public treatment facilities, or dead from overdoses. The state’s attorney claims that Kentucky is like the Wild West, with all of the crimes and activities taking place. Kentucky claims the drug company completely destroyed an age generation and their communities. The rate of painkillers used in Kentucky is twice the number New York and New Jersey. Purdue Pharma denies all claims against them.

Of the 12 claims against the company, a few listed are Medicaid fraud, false advertising, creating a public nuisance with all of the drug induced activities, and unjust enrichment. If Kentucky wins this case, it could cause the pharmaceutical company an extreme loss close to one billion dollars.

In 2007, Purdue Pharma settled a case with federal prosecutors. A section of Purdue Pharma and three of the company’s top executives pleaded guilty to “misbranding” OxyContin as less addictive than other painkillers. They ended up paying $634 million in fines. All states, except Kentucky took a portion of this money. Kentucky was offered $500,000. They refused the money and opened their own lawsuit.

In the case of Purdue Pharma sued for downplaying the addiction of OxyContin, many are awaiting justice in Kentucky. Some consider Kentucky to be the most dilapidated state from this drug, with all of the death and destruction. Kentucky’s prosecutor stated, “This being ground zero, I think there could be no better place for Purdue Pharma to have to stand its ground and answer to the people in our community as to the horrors OxyContin has brought over the years.”

Tags: Purdue Pharma sued for downplaying the addiction of OxyContinshare: