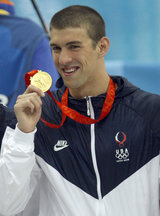 Olympic gold medal swimmer Michael Phelps pleads guilty to his second DUI in ten years and is placed on probation. Baltimore District Judge Nathan Braverman tells him, “You don’t need a lecture from the court. If you haven’t gotten the message by now, or forget the message, the only option is jail.”

The swimmer was arrested and charged with drunk driving for the second time in September of 2014. Because Michael Phelps pleads guilty to the September, 2014 DUI charge, his sentence of one year in prison was suspended and he received 18 months of supervised probation instead. He will not be permitted to drink alcohol while on probation.

On September 30, the swimmer was charged with driving 84 mph in a 45 mph zone and of crossing the double yellow line in Maryland’s Fort McHenry Tunnel. Police say his blood alcohol level was .14 percent, almost double the legal limit in Maryland of .08 percent.

The athlete had previously plead guilty to a 2004 drunk driving charge and received probation because it was his first offense. He performed community service by talking to high school students about the dangers of alcohol.

Drunk driving arrests aren’t the only challenge Phelps has recently faced. In 2009, a British tabloid printed a photo of him using a marijuana pipe at a South Carolina party. He was subsequently dropped by Kellogg Co., one of his major sponsors, and was also suspended from USA swimming for three months.

Probation won’t interfere with Phelps’ plan to train for the 2016 Olympic Games in Rio De Janeiro. He came out of retirement to compete in that event, and it will be the swimmer’s fifth year in the competition. He received a six-month USA Swimming suspension after his recent DUI charge, but that suspension ends on March 6.

Although Phelps has been banned from participating in the Swimming World Championships next summer in Russia, he plans to swim in three U.S. Grand Prix events and is expected to add a few additional international swimming events to his 2015 schedule.

Allen described the 18-time gold medalist “a wonderful person” who is not only gifted athletically but also gives back to the community. Allen added that Phelps “gets that he has a problem and has had nothing but remorse for his mistake.”

The Olympian admitted that he had shown poor judgment in the incident but claims he now has “the tools to move past this. What I did was wrong, and I made a bad mistake. I’m looking forward to having a much brighter future than I had in the past.” He added, “I have learned from this mistake and will continue learning from this mistake for the rest of my life.”

Heroin-Related Overdoses May be Under-Reported