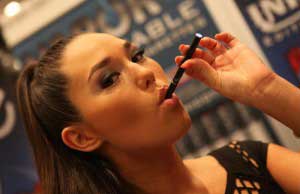 E-cigarettes were all the rage the past few years, being promoted as healthier than regular cigarettes. A new study done in Japan has proven this promotional tactic wrong. E-cigarettes are electronic devices that were supposed to take over for tobacco cigarettes. They are becoming increasingly popular around the world, especially among young people. The devices look like a normal cigarette, but function by heating flavored liquid. This liquid often contains nicotine, which does not make the product less addictive, but was supposed to be healthier for users. Once this devices heats up the flavored liquid, it turns into a vapor that is inhaled, similar to smoking a traditional cigarette, but without the offensive smell and smoke.

Naoki Kunugita, a researcher in this project stated, “In one brand of e-cigarette the team found more than 10 times the level of carcinogens contained in one regular cigarette.” The researcher added that the amount of formaldehyde detected varied throughout the course of analysis, but on average the results were at a level of 10 times the amount of formaldehyde than regular tobacco cigarettes.

With a suspicion of the goals of these companies selling this new product, Japan has taken charge in finding the truth behind e-cigarettes. Some people believe this is a new way to get teens hooked on smoking, with the hopes of these teens switching to smoking tobacco products later in life. Japan is looking at this situation as a serious threat and plan to get to the bottom of it.

In August, the World Health Organization called for governments to ban the sale of e-cigarettes to minors. With not enough research to back up the serious threat claim, the World Health Organization claimed there was enough evidence to add warning labels directed towards children, adolescents, pregnant women, and women of reproductive age about e-cigarette use, due to the potential dangers that could be associated with this new product.

Supporters of the e-cigarette say the device is a safe alternative to traditional tobacco. With tobacco being linked to toxic chemicals and gases can cause cancer, heart disease, and strokes. Tobacco is also labeled as one of the leading causes of death in many countries. With a reputation like that, anyone would think smoking anything else would be healthier. Opponents of the e-cigarette state the device has only been around for a few years and the long term health factors and effects are still unclear. One thing is for sure, Japan plans to get to the bottom of this debate.

Father Forces Son To Drink As A Punishment