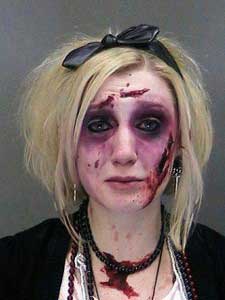 Yes, you heard it right. Happy Halloween. However, it was not such a Happy Halloween for the drunk zombie arrested twice in 3 hours. Catherine Butler, 26, was arrested not once, but yes you guessed it twice, while wearing her Halloween costume! Her mugshot is making hype all around the internet, as she is dressed in full zombie makeup, for a Halloween party.

She was pulled over the first time for driving without her lights on, around 2 AM in Gates, New York. She then called her friend, who picked her up from the station. Not even 3 hours later, she was pulled over by a different officer around 5 AM and taken back to the station for yet another DUI. The second arresting officer stated that she was swerving all over the road. So, Catherine Butler got to take another Halloween mugshot. This time, however, police did not want to take any chances. When she was released, police drove her to her house. Surprisingly, the police did not keep her overnight. You would think after arresting her a second time, they would just keep her in a cell. Hopefully the drunk zombie stayed in after that.

The most shocking side to this story, is that this was not just a fun night attending a Halloween party. Butler did not just make a few poor choices after leaving a Halloween party. She has 2 prior charges for driving under the influence. She received one in 2011 and her first DUI was received in 2006. Having 4 DUI charges by the time you are 26 years old is an alarming statistic. If anything this should be considered a cry for help for her friends and family. Hopefully, after being arrested and charged with a DUI twice in 3 hours, it will snap her back into reality. If anything, at least all the attention her mugshot being passed around all over the internet will bring this to the attention of her family. Maybe after seeing her behavior, they will take a step in the right direction and get Butler the help she needs before she injures herself or someone else.

One thing can be said about the drunk zombie arrested twice in 3 hours, at least police were able to detain her before something serious happen. Hopefully this zombie will be staying inside tonight and not out driving around.

Interventions During the Holidays