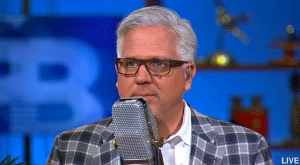 On the November 6th episode of The Blaze, Glenn Beck’s talk show, a drunk man impacts Glenn Beck viewers and Glenn himself. Ed, a bus driver from Massachusetts, called in to the show looking for help. Ed explained that he lost his job the day before and wanted to hear more about Glenn’s faith and struggles. Glenn Beck is a recovering alcoholic and often talks about religion.

Ed went on to explain his situation in a very tearful tone. Ed explained he was a bus driver and claimed he would never put the kids at risk. He therefore stepped down from his position, because he could not handle the shakes and withdraw symptoms he was having. Ed reached out to Glenn saying, “Your faith in God is something that I desperately need right now.” In the middle of his tearful breakdown, he cried to Glenn saying, “I wish I was as strong as you!”

That is where Ed chimed in, claiming he was having trouble believing in God. Glenn claimed that back in his situation he did as well. Glenn claims he was taught to believe in God and that did not work for him. For Glenn, he had to find God and that meant looking at everything. He said to get rid of the idea of coincidence and look for the messages. He asked Ed if he knew how many calls Glenn took for his show in a month. Glenn stated that he took around 15 calls per month. In Glenn’s eyes this was a message. Out of all the callers for that day’s show, Ed got through and was able to talk with Glenn. This was no coincidence in his mind.

After Glenn told Ed to get to an A.A. meeting right away, Glenn took another call. This was a call from a man that was in his car listening to his show on his lunch break. This caller was in a similar situation as Ed. He claimed he was just about to drink a bottle of vodka on his lunch break. Ed’s story gave this caller a wake up call and he wanted to thank Ed for that. Glenn claims each and every one of us is struggling with something stating, “Life is a hospital. We are all patients. There is only one doctor.” Ed, the drunk man impacts Glenn Beck viewers by being strong enough to admit he is struggling and needs help.