Alcoholism and the Effects of Alcohol

Alcohol abuse is a major problem in our society. Where did it all start and what is it actually made of? Pharmacologically, ethyl alcohol is a water-soluble liquid that is produced by primarily two methods. Fermentation is the oldest method of producing ethyl alcohol. The fermentation of fruits or grains will produce wines and beers. The highest concentration of ethyl alcohol obtained from this process is about 12% or 24 proof. The second method is distillation. Distillation can produce up to a 95% or 190 proof concentration of ethyl alcohol. This process is used to produce liquors and whiskeys.

Scars for a Lifetime: How Alcohol Affects Families

Alcoholism affects — and infects — every single person it touches. In a family, not only the alcoholic suffers, but spouses, children, parents, and siblings also are hurt and damaged from this chronic, complex disease. But alcoholism as a disease? Yes. According to The Alcoholism Guide, a recent Gallup poll showed that 90 percent of Americans see alcoholism as a chronic disease, a diagnosable and official medical condition. When one member of a family is sick with alcoholism, then relatives and even friends also suffer.

Alcoholism affects family members in various ways, though the harmful effects can deeply injure all and may even last a lifetime, if left untreated. Some of the major facets of alcoholism within the family dynamic include:

Alcoholism can both, directly and indirectly, affect children of drink-dependent parents. 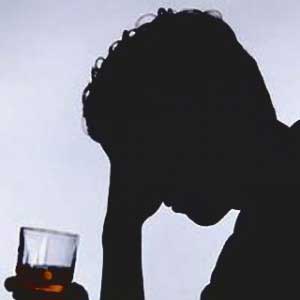 One real, direct danger of alcoholism is Fetal Alcohol Syndrome (FAS). This condition occurs in children whose mothers drink during pregnancy. The amount of alcoholic damage to a fetus is related to how much the mother drinks during pregnancy. In general, babies with FAS are smaller than normal babies, and they have damaged nervous systems. Physical deformities also are common and include small eye openings, long, flat faces, and thin upper lips. Many babies with FAS also have deformed brains and skulls. Children with FAS often have trouble with learning and problem-solving and have poor social skills. They also have poor coordination, short attention spans, and impaired hearing and speech. One thing is certain, though. However FAS manifests in children whose mothers drank during pregnancy, the effects are permanent and irreversible.

Children of alcoholics also often suffer higher stress than children in non-alcoholic homes, stress that can be manifested by crying, bed-wetting, and nightmares. These children also may suffer from fears of abandonment, guilt, loneliness, crushingly low self-esteem, and chronic depression.

A Unites States government survey, “Exposure to Alcoholism in the Family”, concludes that 30 percent of young women who failed to graduate from high school had grown up with alcoholic parents. This survey also shows that only 20 percent of young men with alcoholic parents went on to attend college. Negative behavior patterns can include fighting, lying, truancy, and stealing. Sadly, incest and domestic violence rates are high within alcoholic families. Often, victims of sexual and physical brutality feel guilty, helpless, and ashamed. To quell these negative feelings and dull the pain, they themselves may begin drinking, thus carrying on the cycle. “Children of alcoholics are people who have been robbed of their childhood,” said author H. Silverstein in the book Alcoholism.

The husband or wife of an alcoholic can suffer in many ways, including self-pity, intense feelings of hatred, isolation from avoiding social contacts, exhaustion, and they also may become physically or even mentally ill. Often the non-alcoholic spouse may take on the role of both parents, in effect becoming a single parent, and thus may become demanding, inconsistent, and neglectful with the children. Alcoholism is one of the major factors in divorce, as well.

Relatives of an alcoholic may become codependent. “Codependency is an unconscious addiction to another person’s abnormal behavior,” said author C. Wekesser in the book Alcoholism. Often, codependent family members go to any lengths to put forth the image of a “perfect family” and hide the problem. To do this, the spouse and children of an alcoholic may avoid making friends and inviting people to visit the home. Codependent relatives often forget or put aside their own needs and spend their lives trying to cure or at least to control the alcoholic. Finally, codependent relatives may become enablers, lying and making excuses for the alcoholic, thus allowing the alcoholic to continue drinking.

Alcoholics are born with a genetic tendency for the disease. Genetic factors are attributed to the largest responsibility in whether or not a person is born alcoholic, existing in 50 to 60 percent of alcoholism cases. Statistics support the view that genetics plays an integral role in the development of alcoholism.

The negative effects of alcohol dependency run deep throughout families. Alcoholism involves environmental, genetic, and psychosocial factors, and no member of a family that includes an alcoholic is left untouched. Whether a family’s negative experiences involve physical deformities, emotional wounds, or abuse, alcoholism damages all who it touches.

Alcohol starts affecting the body immediately upon consumption with the severity being determined by body size and sex, the type and proof of alcohol, how quickly it is consumed, and what other drugs have been taken with it. Physically, Alcohol affects nearly every organ of the body with the only exception being the ear. Mentally, these effects include delusion, denial, loss of memory, loss of control, inability to predict the outcome, euphoria, impaired judgment, feeling of decreased inhibition, decreased fear, increased risk-taking behavior, and aggressive humor.

In addition to the previous information, we have provided the following pages to be of help to you about alcoholism:

Intervention Services can guide, educate or be a resource to you, the one who is reaching out. Essentially, Intervention Services is on hand 24 hours a day to help you to help your loved one who may be abusing drugs or alcohol. If you have questions or need to speak with someone, understand that most of our employees are recovering professionals who can speak with you as someone who once abused drugs themselves.